The shelves in Iva Pfeiffer’s sewing room are stacked with neatly folded fabric samples, bundles of wool, and possibly every craft book ever written. There are books on bobbin lace, on embroidery, on weaving fabric from silk. Lately, she has been experimenting with natural dye. She shows me a hank of sheep’s wool, which she hopes to turn into fabric – just as soon as she can figure out what makes blue dye. Blueberries, she says, are notoriously unreliable.

This kind of curiosity is characteristic of Iva. At 29, she’s done three different qualifications. She’s visited silk farms in Cambodia, Angora factories in China. She’s the youngest member of the laceworker’s guild in Sydney, and studied kimono making with a sensei in southern Japan. In 2014 she was one of fifteen internationally selected for the Art of Fashion Foundation’s design masterclass in Paris. Iva has always been practical, she says, never academic. Practicality, combined with a love of learning, have seen her graduate from Raffles College as one of the top fashion designers in her class.

It was curiosity that spurred her first runway collection. While watching a documentary on SBS, Iva came across the story of Mori, an Iraqi-Iranian man who had come to Australia as a refugee. In late 2014, Iva hadn’t heard about detention centres. She wanted to know more. She introduced herself to the man on Facebook, and they met for coffee. “I was shocked by all the information. I started to question what I was doing – I wanted to help, but what could I do with fashion?”

It’s certainly a difficult problem to tackle. There are currently an estimated 60 million people displaced from their homes around the world, for reasons ranging from poverty to religious persecution. In Australia, asylum seekers who arrive without a valid visa are detained in offshore detention centres, often for very long periods of time, causing harm to already vulnerable people and costing the government millions of dollars. The Sydney Morning Herald recently reported that self harm in Australian detention centres has reached epidemic proportions. Whatever the solution is, Iva says, it is clear that we haven’t yet reached it.

She pursued her research independently of the college at first. She met with more refugees who told her their stories, and introduced her to their friends. “I felt really passionate about it… The more I learned about their culture and about the Middle East where many refugees come from, the more I felt inspired. Their culture, their fabrics, the carpetry and furniture and art… It’s amazing how much they have given to the Western world. I felt there was so much richness behind that.” When she received her final assignment – to make a collection around the theme Revolution, Adaptation, Resolution, Iva knew what she wanted to do.

“I feel a revolution for current times would be one that stands up for humanity and the right of a dignified life for these refugees. The best way I could demonstrate revolution at this point in my life is through my major collection. Hopefully, [it] will inspire others to also look further into this topic and find the truth themselves with open-mindedness and empathy in their hearts,” she says.

On the runway, the result is disruptive. Amid a class of mainly ready-to-wear designers, Iva’s work is – deliberately – unpolished. In hand knitted socks and soft, felted fabric cut away in uncomfortably revealing panels, her models look vulnerable. One dress hides the face, only visible from the eyes up. Another restricts the arms, forcing the wearer to move in strange ways. The models carry large, heavy bags made from salvaged Persian carpet, deliberately inside out. There are five garments in total, each addressing a slightly different aspect of the refugee experience.

The collection took just eight weeks from concept to completion. Iva faced some challenges along the way. One of the most surprising was just how strongly people feel about the issue. “When my friends heard about the collection they were calling me saying that’s crazy! You can’t support refugees, they get enough support already. What are you doing!?.” Sometimes it was hard even for Iva to talk about. “The stories I was hearing were heartbreaking. It was hard to keep the collection positive. I didn’t want to be critical of anyone, because I don’t know what the solution might be,” she says.

For all the anger, Iva came across a lot of kindness, too. People were eager to contribute to the project. A chance conversation with her college librarian gave her the plastic panels in one of her coats: he happened to be recovering books and gave her an armful of the old plastic. The knitted plastic of a collar comes from her local dry cleaners, the socks are hand made by her mother, and the carpet bags were constructed by a craftsman in Iva’s village in Czech. One of the coats uses wooden beads, which, Iva says, come from her window blinds. “I was looking out the window, wondering what to use, when I saw them! Every blind has two wooden beads on it – we went around and cut off every one in the house.” They need new blinds now.

It’s not surprising people wanted to help – listening to someone talk about their passion is exciting, and Iva is definitely passionate. Perhaps, I suggest, her strong connection with the refugee story comes from her own background. Iva agrees – “but,” she is quick to add, “my journey was much easier than theirs.”

Iva was born in Czechoslovakia in 1986, three years before communism fell. Her parents opened a dress shop in her village soon after, and Iva worked as a tailor and attended tailoring school at age 15. At 22, her parents sold the shop and Iva moved to Australia. In a new country, unable to speak the language, Iva had to learn fast.

The refugee collection will go up for auction in May this year, along with items from Iva’s upcoming project, a resort wear line to be shown at Fashion Week 2016. The money will go to UNHCR, a charity supporting refugees around the world. Iva’s not certain yet what she wants to do with her bachelor of fashion design, but she hopes it can always be part of her old dream too: helping people. “I hope that I can somehow combine it together, doing fashion but with a social conscience. Whether that’s making patterns for a community in Bangladesh, or standing up for the refugees, or just ensuring that I do everything as sustainably as I can… I hope that I can always design that way!” 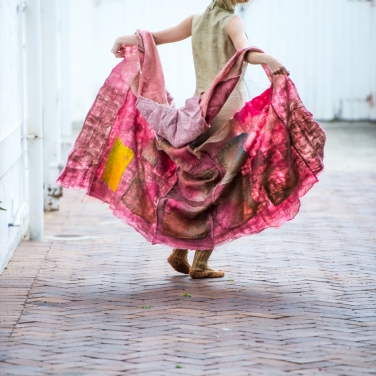 Iva has moved to Melbourne to pursue a career in fashion design. She’s still experimenting with natural dyeing, and is hoping to adopt a sheep for her 30th birthday. She lives with her husband Steve, cat Ishi, and maybe one day her own silk worms.

View all posts by 107social